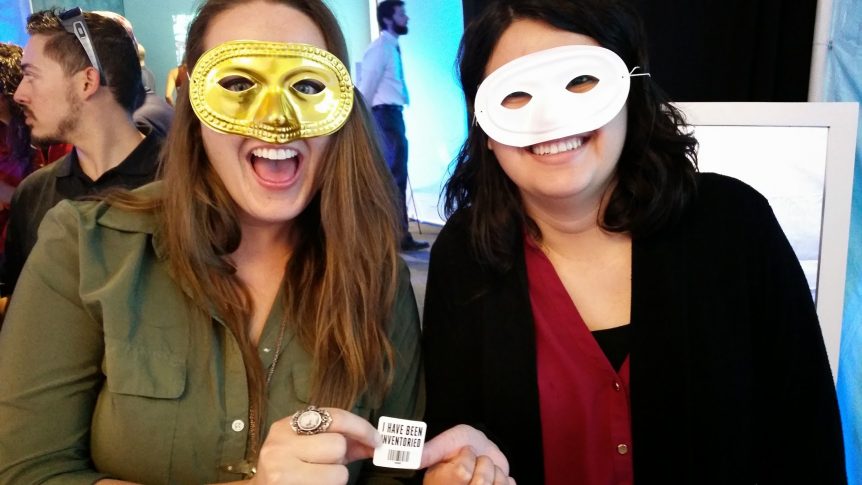 The Future of Personal Privacy – Review of “You Have Been Inventoried”
Tery Spataro
First published on Institute of Ethics and Emerging Technologies, May 29, 2015

You Have Been Inventoried raised several questions: 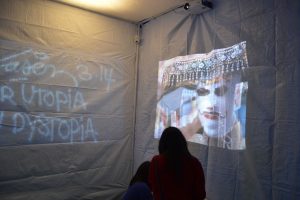 During the event, visitors gathered in the 10 x 10 room, which represented a small amphitheater, with projection from three different slide shows with music. The images portrayed human classifications, surveillance of citizens and surmise the future as a harsh birth from digital and technology. Most images portrayed a dark and ominous future for privacy.

There were masks laid out on a table for visitors who were inclined to use them so that their identity would not be recorded. When a visitor would arrive, we would ask them if they wanted to be inventoried. A simple direct question, giving away no clue as to the purpose of being inventoried and whether being inventoried provided a benefit.

Throughout the evening, we inventoried over 100 people. By my observation, 9 out of 10 visitors want to be inventoried. About 2% questioned the reasons for being inventoried. While 90% of our visitors just accepted it and did it.

One visitor did bring up an astute observation about the barcoding we used. He said with deep sadness; it reminded him of the identification used in Nazi concentration camps; therefore, he declined to be inventoried. He was from the boomer generation and recalled family and friends that had died during that horrible time.

While, demographically, most of the attendees under the age of 40 were very eager to be inventoried, the younger the age, the less likely they were to ask any questions about the reasons for being inventoried.

What we think of the future of privacy was a research topic published Pew Internet conducted by Lee Rainie, Director, Internet, Science, and Technology Research, Pew Research, and Janna Anderson, Director, Elon University’s Imagining the Internet Center, titled the Future of Privacy, these quotes stood out:

Bob Briscoe, the chief researcher in networking and infrastructure for British Telecom, wrote:

“Lack of concern about privacy stems from complacency because most people’s life experiences teach them that revealing their private information allows commercial (and public) organisations to make their lives easier (by targeting their needs), whereas the detrimental cases tend to be very serious but relatively rare.”

This statement signals a lack of awareness by the general public. Those who are aware may not have a say in using their data in the future, as the Internet of Things (IoT), wearables, mobile, and web surfing habits are collected. More so than IoT, wearable, and mobile apps, which can track your data and willingly share it with your healthcare providers and insurers, as you elect to earn points and discounts instead of electing to determine the use of privacy, most users do not care to read the content of privacy statements. Most of the language contained in these statements is often confusing.

All may not be lost to ignoring the potential risks; in another comment in Future of Privacy,  Rebecca Lieb, an author and an industry analyst for the Altimeter Group, wrote that today’s Millennials by 2025 make policies:

“My optimistic viewpoint is that, with just a bit more time, those who will attempt to balance the interests of personal privacy and business interests will do so from a more informed perspective, legally, culturally, and with a better perspective on disruption.”

Jules Polonetsky, the co-founder of the Future of Privacy Forum, leads the charge to create the awareness necessary to alert users of the potential drawbacks from loss of privacy. In a recent discussion, Jule Polonetsky revealed how organizations gather can easily gather data from day to day use of mobile. There is a convenience that Bluetooth brings to every day. There are also risks of a decrease in privacy.

You Have Been Inventoried was a thought experiment, which challenged our conventional thinking about privacy and identity. In the future, it seems we will less likely value our individual identity and privacy. As the future comes forward, we will be more willing to suspend our identity and privacy to line up and be counted.