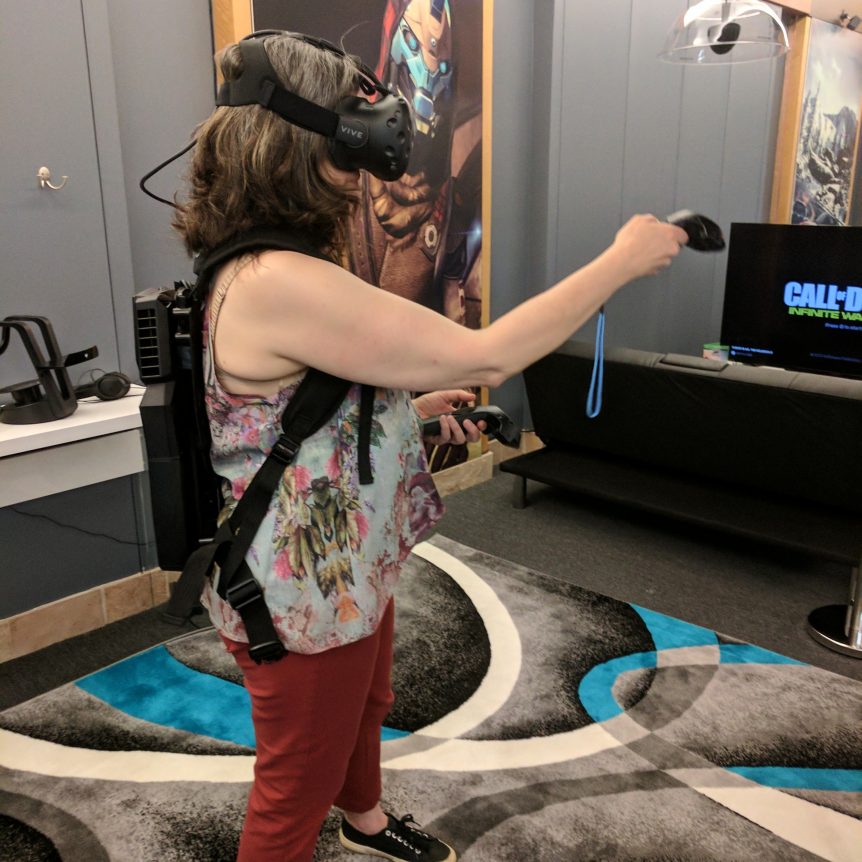 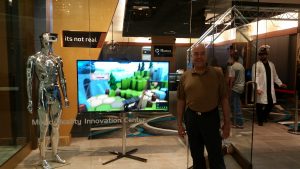 Fully engaged and emerged mixed reality experience, HoloDeck Stamford, founded by brilliant entrepreneur, Todd Fuchs,  invites the user to become one with the digital universe. That is exactly what I did! I was thrilled that three of my five senses were fully heightened.

Over the past couple of years, I had tried different types of mixed reality experiences; one earlier this year at the Whitney Biennial created by Jordon Wolfson,” Real Violence”, which is completely shocking and horrifying leaving the voyeur to feel off balanced. I was told, even some participants became nausea. I thought there will be mixed reality experiences with horrible content and consequences as a result of the experience, but Jordon Wolfson took mixed reality to a dangerous extreme – strangely as open as I am I have a hard time calling his piece a work of art.

But 360 degrees different is the HoloDeck Stamford, the experience is enjoyable immersive and giving me ideas that would lead to all sorts of content. 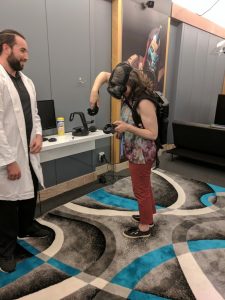 Getting used to the controls and backpack at the Holodeck Stamford, CT. Photo by Paul Blair

While most mixed reality enthusiasts will expect the high-end gaming experiences,  what I learned is mixed reality will give way to teaching people so sorts of things. During my trial of HTC Vive and MSI backpack, I felt a strange sense of becoming part of the device even to the point of feeling claustrophobia preventing me from wearing the headset for sound. As I gained my equilibrium I was able to venture into the lab find a game I wanted to play but before doing so I could resist interacting with the dog. The dog was convincing in this state. I couldn’t help myself, I reached down and tried to pet the dog’s head. After encountering the dog I found my way to a game that I wanted to try – it didn’t disappoint. My brain compelled my eyes to perceive three dimensions when the game started there was a feeling of weight, depth, and distance to the objects and field. Another point of interest to note is I lost track of time. The Vive experience has the same feeling of loss of time as a sensory deprivation tank. I was tapped on the shoulder told my time was up – in which I could hardly believe.

Onto my second time trying out the Hololens. This time I was instructed to follow the tutorial and I actually enjoyed doing so. Gesturing is awkward after practicing I managed to get used to it.  Building a train track was challenging and lucky for me my train did not derail.

Like anything new, there will be challenges and unforeseen consequences – do be careful not to bump into anyone or mistake a digital surface for something to lean on.

There’s so much that can be done, I’m completely excited about the future.