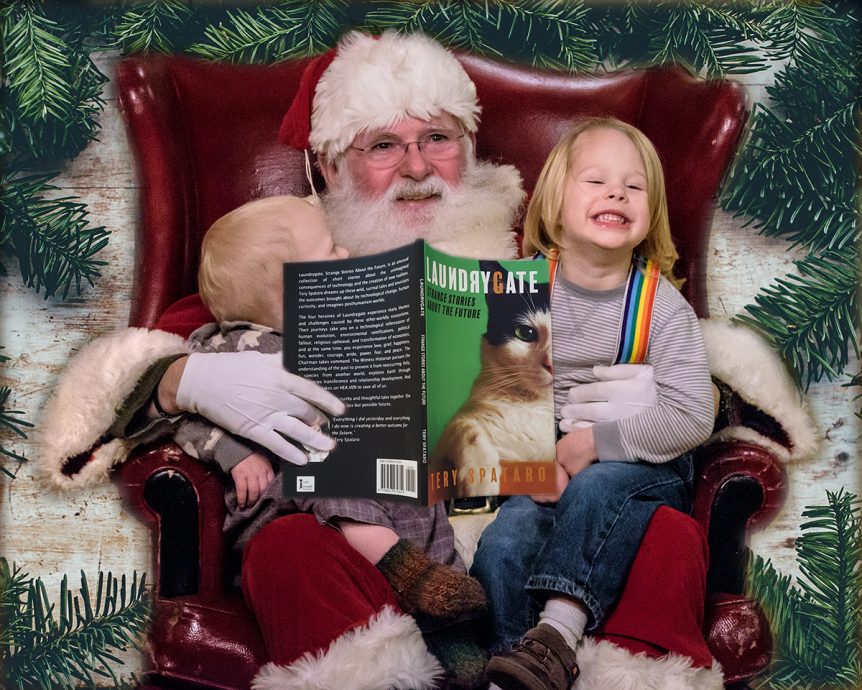 Slicked-out with the bells and whistles, the velvet techno-coat emerges before him. Enthusiastically, he selects the coat, transforms, and admires the look. A sparkling red visor perched on his nose signals and Jingle Bells begins to play. The white curls of his beard move about as if alive. He roared like a lion happily giving commands.

The console before him revealed a live feed of data identifying the naughty and nice.

He finished fifty-five percent of his route.

“I’m taking a break!” he declared.

The data feed continued throughout the night to take in the requests and recounts. Automatically distribute – who, what, where, and when.

There was a faint buzzing thereabout, then hovering before him a shiny plate with a hot steaming beverage and treats. His massive, gloved hand reached out and accepted. Carefully lifting the mug to his lips sipped.

Eying the assortment of cookies. He patted his stout belling before snatching a sweet.

He indulged in his snack, watching video gift requests. Some faces were more familiar than others. A couple of gift appeals caught him off guard.

Looking as professional as ever, the Chairman, not use to pleasantries, gave a strange wide grin, “Rose color ocular implants would suffice nicely.” She asked with attitude.

And next video came appeal, “…I only want one thing. Only one small thing – it’s not much to ask. I only want my own history bot team.” Witness Historian asked looking hopeful.

In the next video appeared a one-eyed translucent beauty with a voice that sounded like a song, “Oh, wise one of the glorious merry day, the only thing I crave more is another trip through the Interstellar Trans-Mirror.” Kela of Proxima B took a bow after her request was made.

Then an unusual character made a six-second video. Mr.-Skip-the-Life-Fandango trying not to be pouty, morphed into a bright shimmering moon, “I want Kela!” was all he said before his video faded to black.

Last, but not least, Jessa, the Creator, announced to Santa, “When you are ready old man, I have a wonderful place in HEA.VEN where you can continue to exude everlasting joy.”

Gleefully shouting at the screen, Santa declared, “Your wishes are granted!”

With a flick of his controller, his team was assembled. The reindeer bots playfully pranced about. The elf bots brought brilliant bulging bags of blissful delights.

Placing the gifts before Santa, Elf bots cried out, “Santa, are we going to finish the route on time?”

He let out a chuckle, “Of course, my dear bots we will make it! So Christmas is much easier with VR and AI to make dreams come true. It’s only a matter of point, click and place.”

Santa, confident, the task is being completed, sat back in his soft pleather chair, kicked up his feet, and a white and black kitten jumped on his lap and purred tenderly.

Merry Christmas & Happy Holidays from all the Laundrygate Characters! Let’s have a Non-Surreal 2021!

Laundrygate, Strange Stories About the Future is available for Kindle and in paperback.