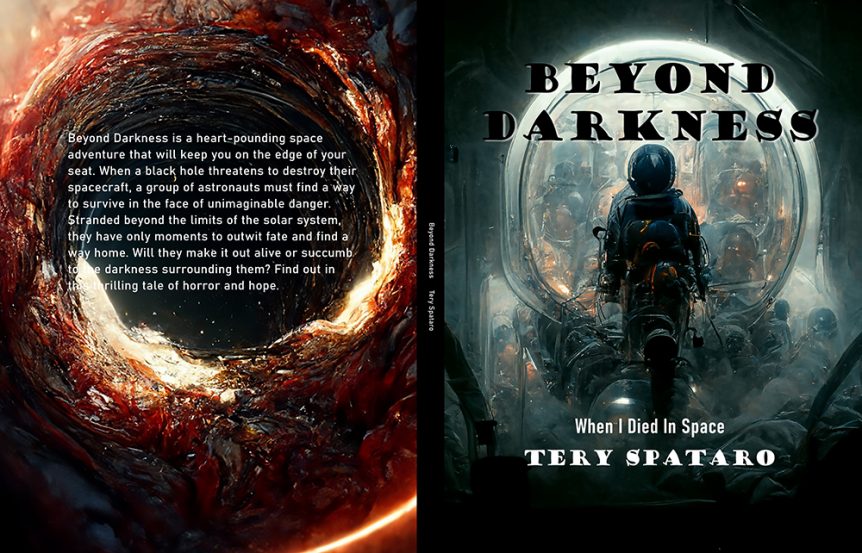 Please welcome my final book of 2022! An epic tale of horror & hope, Beyond Darkness, When I Died in Space, is a heart-pounding space adventure keeping you on the edge of your seat.

Creation of Beyond Darkness

When I first began toying with the idea of a black hole as a metaphor for dealing with pain and suffering, I had one simple goal: to create something that felt like it was ripping you apart from the inside out.

It’s a strange thing to be able to describe something so abstract. But, in the end, all I wanted was for people to feel what it’s like when your entire world changes—when your life is ripped away from you and when you realize that nothing will ever be the same again.

And so I created Beyond Darkness.

Beyond Darkness isn’t really intended to simulate a black hole; instead, it’s meant as a metaphor to explore horror and hope. Science teaches us that a black hole is blue (and they’re actually pretty beautiful). But when I was creating this piece, the effect of blue was too calm by far; it didn’t convey the sense of trepidation I wanted my audience to feel. So instead of keeping things as they were, I changed around some colors until red emerged as the dominant hue in every scene—a way of telling my viewer that something terrible has happened and there’s no going back now.

Black holes are often thought of as destructive forces, capable of sucking in anything that comes too close. I wanted to create something that captured the feeling of being torn apart from the inside out. The story is told from the first person perspective and illustrations of astronauts are deliberately distorted so that the reader could feel emerged.

This was an epic undertaking! I created 558 images to tell this story but only 90 images made the cut. The prompt crafting was tailored using unique modifiers with only references to the style such as dystopian. I began creating Beyond Darkness from a creative challenge given by illustrata and Ron Reed in September. Wow, I learned so much about creating science fiction horror. I’m grateful to have 2 pieces included in their #halloweenhaunt2022 gallery.

The print edition of Beyond Darkness is now available. This is my 3rd AI-infused art book. The eBook is coming soon.

This book has a special dedication to Tom Lombardo and Jeanne Lombardo who taught me so much about science fiction and creating stories.

Beyond Darkness, When I Died in Space is available: